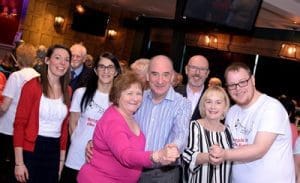 An overwhelming number of dancing feet have ensured an Aberdeen initiative, aimed at bringing together older people of all abilities, has become a permanent monthly fixture.

Boogie in the Bar, hosted by the Foundry Bar, now takes place on the third Friday of every month after the disability and dementia friendly disco proved to be a resounding hit with local communities.

Boogie in the Bar organisers welcomed Maureen Watt MSP, Minister for Mental Health, to this month’s get-together, which took place on Friday (19th January), to witness the trailblazing initiative first hand and meet some of the participants who have been enjoying the free relaxed disco since launching in March last year.

The event, which was launched with the hope of it becoming a regular fixture, has seen numbers double and now runs monthly, often attracting over 80 participants of all ages and abilities. Boogie in the Bar won Best Community Support Initiative category at Scotland’s Dementia Awards 2017.

The initiative was initially thought up by local resident Anne Duncan after a chat with a member of staff from registered charity Sport Aberdeen where she said what she really misses is a “proper bop with her husband Bill”, who is living with dementia.

“Connecting people to socialise and dance is a wonderful idea. It is a testament to Boogie in the Bar that it has grown from an idea to specifically support people with dementia and their families to welcoming so many more people from a variety of backgrounds.

“There are many reasons that people can feel isolated, and that can make it difficult to get out, socialise and stay active. Activity and engaging with people can have huge benefits for people experiencing loneliness whether that is caused by circumstance, physical or mental ill health.

“The growing popularity of Boogie in the Bar shows the significant impact you can have when you give people the opportunity to come together and enjoy themselves.”

“To see Boogie in the Bar go from strength to strength in such a short amount of time is terrifically encouraging and I hope that we can inspire even more communities to get their dancing shoes on.

“The initiative has proven hugely successful with the sheer volume of people attending and the clear demand for this to become a permanent fixture. The fact this has been replicated is brilliant and shows what can be achieved in our communities through partnership working.

“I know of people who now come along to Boogie in the Bar regularly, who rarely went out before. They didn’t go out because there was nowhere to go, and if you are single it can make socialising so much harder.

“Loneliness is a huge issue for many people but at Boogie in the Bar everyone feels welcome and safe. It’s really like a huge happy family as everyone is getting to know each other, all with the same aim of dancing, enjoying the music and the company. We’re all integrated like in my husband’s favourite musical, Hairspray!”