Hot on the heels of the recent belt examinations, the latest Sooyang Do sparring competition was held on the 9th of June, at the Axis Centre in Newmachar Aberdeenshire, and was a great success. 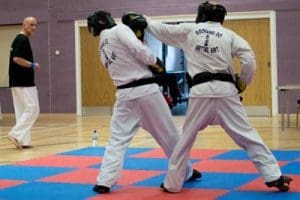 The clubCAP Martial Arts group held the competition, which covered a range of levels and age groups, to also raise money for CLAN.

The unique spirit of Sooyang Do was clearly in evidence, as all participants allied their competitive spirit with the tenets of Sooyang Do, to provide a tournament which encapsulated a martial art in which there are no “losers” and in which the progress and development of all students is paramount, thereby giving lie to the discredited theory that “winning is everything”. The club successfully raised £115 for CLAN.