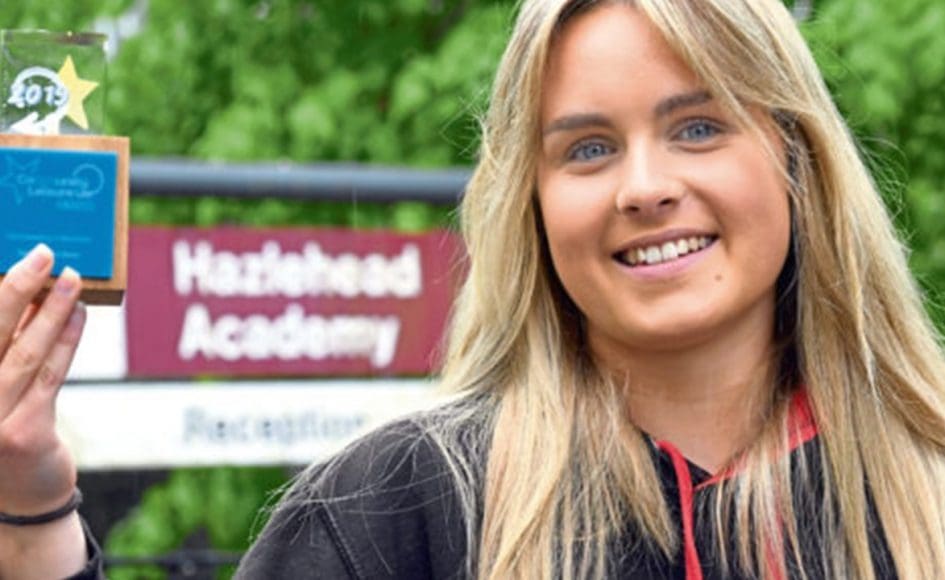 An inspirational Aberdeen teenager hopes to use her own experience of an eating disorder to promote physical activity.

Aimee Work, 15, suffered from the problem from the age of just 10.

It started as a dissatisfaction with her teeth but then grew into severe body image issues which led to the schoolgirl restricting her diet.

Despite a battle with her own mental health, Aimee made it to the other side – eventually volunteering with Sport Aberdeen’s Active Schools and serving as the chairwoman of the Active Girls committee.

Aimee, who has just left Hazlehead Academy, hopes her experiences can now help inspire a generation of youngsters to love themselves, as well as take up sport and physical activity as positive outlets.

Aimee, from Mannofield, volunteers at her former school, as well as the feeder primary schools Airyhall and Hazlehead.

Her first involvement in the committee was in her second year at school, after a PE teacher let her know about it being formed.

“They thought it would really benefit me.

“However, the real reason I wanted to be able to take part was, when I was about 10 years old, I suffered from an eating disorder.”

Aimee told the Evening Express she would under-eat and over-exercise in a bid to improve her view of herself.

“I lost a significant amount of weight, and it got to a point where my body couldn’t cope – both physically and mentally – with what I was putting it through.

“I was quite depressed and I broke down and revealed what I had been putting my body through.

“I really struggled to come to terms with how much I had damaged my body and the measures I went to.

“It was at that point I wanted to bring physical activity back into my life in a positive way.

“When I heard about the committee being set up, I knew I could use the determination and drive I had to ensure issues like self-confidence and body issues were being addressed.

“I think it’s really important that girls and young women are given the mental support they need at this really vulnerable age.

“It’s something Sport Aberdeen and the committee are really good at doing.

“Whenever we do talks or events, mental health is something we always try to address.”

The teen was told she was just a month away from being hospitalised with her disorder.

“That hit me really hard. I think at the time I was quite young and naive.

“I was aware of what I was doing but I just had this extreme self-hatred about how I looked, and a never-ending battle with my weight.

“It was an extreme focus on how much I ate and exercising as much as I could.”

Aimee now credits her commitment to being active with aiding her recovery, saying she is “in a much better place” and she tries to use her own experience to help others.

“I’ve completely turned around from what I went through a few years ago.

“We try to highlight the more emotional, social and mental things that come with physical activity, not just the health benefits.”

For her inspirational work with younger girls, Aimee was recognised at the glittering UK-wide Community Leisure awards in Manchester, which presented her with the outstanding volunteer award.

Having left Hazlehead Academy a few weeks ago, Aimee plans to head to college to study for Highers and her goal is to go on to university to train to become a nutritionist in the hopes of being able to promote healthy dieting.

“I am absolutely thrilled for Aimee.

“It is fitting tribute for what she has achieved at such a young age and she is an ambassador the city should cherish.

“It is also recognition of the great work of the Active Schools team and the Active Girls Committee who work hard to get girls engaged in sport.”