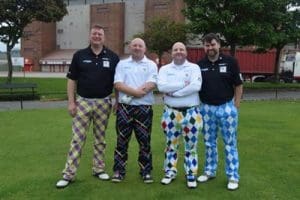 A golfer who recovered from cancer treatment with the help of CLAN has completed a grueling golf challenge in a fundraising effort for the charity.

Martin Reid was diagnosed with a cancerous tumour in early 2014 but went on to make a full recovery and was able to continue enjoying his golf.

During his recovery Martin visited CLAN where he found great solace. Their services made a huge difference and gave him peace of mind.

In response to the good work CLAN did for Martin and thousands of other patients every year, he was keen to give something back to the organisation. It was then he decided to undertake a 50 hole golf challenge to raise funds for the charity.

“We’re hoping to raise awareness as well as funds”, said Martin during day 2 of the challenge, “After coming out the other end healthy I thought I should give something back to CLAN. Golf is something I really enjoy anyway so I thought I’d go for it.”

Teeing off from Brora Golf Course on Monday 22nd June at the early hours of 3:45 am, the 4 man team made their way South then East to play a hole on 50 courses. Martins close friends accompanied him during the challenge which included all of Sport Aberdeen’s courses.

“It’s been great, except for the weather! We thought it would be nice and bright given the time of year but it was pitch black! We’ve had a lot of rain too so conditions haven’t been great, but everyone we’ve spoken too from organising this to the people we’ve met along the way, they’ve made it all great. We’ve played some great courses and It’s been very enjoyable.”

“We’ve definitely raised a lot of awareness and picked up some donations along the way. So far we have raised about 7K but we still have raffles to go so we’re hoping for some more. It’s all going to a very good cause”

Pictured above at Kings Link Tee Off (from left to right): Munro Grierson, Derek Findlay, Martin Reid and Stuart Brown.

Next Article: Champion of Champions 2015