A triumphant year for Sport Aberdeen 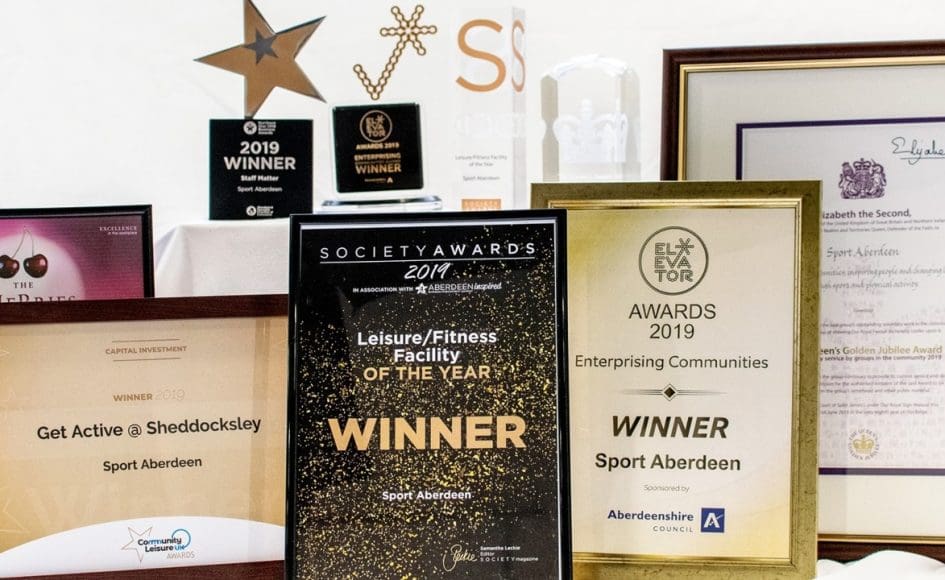 A triumphant year for Sport Aberdeen

An unwavering string of award successes in 2019 has firmly cemented Sport Aberdeen’s place on the national radar as one of the best Leisure Trusts in Scotland.

The registered charity is the largest provider of sport and fitness venues and opportunities in the north-east of Scotland, with one simple goal of getting more people active regardless of age or ability. Sport Aberdeen differs from other sports and leisure providers as all profits are reinvested back into the communities, projects and people that it serves.

Everything that the charity has achieved has been tested against an array of the very best services, projects and programmes of their type on a local, national and UK scale.

From showcasing the best in fitness equipment and state-of-the-art transformational community projects, to shining a spotlight on the people; staff and volunteers, who allow Sport Aberdeen to continue to thrive in its sector, every aspect of the charity has been celebrated and recognised throughout 2019.

To top off a very positive and successful year, Sport Aberdeen received the Queen’s Award for Voluntary Service, the highest award a charity or voluntary group can receive in the UK.

“It fills me with a great sense of pride to be a part of such an exceptional charity, and one that has proven it is making a positive difference to the lives of people in the north-east through the hard work that is carried out day after day.

“The success over the last year is testament not only to the dedication and hard work of all our employees, volunteers and board members, but also to what we stand for as a business.

“It has been a record-breaking year in terms of award successes and this public recognition serves as an indicator that Sport Aberdeen has cemented its place on the national radar as one of the best Leisure Trusts in Scotland.”

Community Leisure UK Awards: Get active @ Sheddocksley won the much-coveted ‘Leisure Capital Project of the Year Award’, a simply staggering achievement for the Granite City facility which was transformed following a £300,000 investment in 2018.

Sport Aberdeen’s commitment to making positive changes within the communities in which it operates and its dedication to creating opportunities, was recognised with a focus placed on the transformation of Get active @ Sheddocksley.

Northern Star Business Awards: Proving that employees really are the heartbeat of Sport Aberdeen, the charity took home the ‘Staff Matter’ award at this year’s celebration of the exceptional accomplishments of organisations across the north-east.

Society Awards: Sport Aberdeen triumphed over local fitness providers to take on the title of Leisure/ Fitness Facility of the Year at the glittering, inaugural awards ceremony, celebrating the best that Aberdeen has to offer from eateries, shops, beauty salons and leisure providers.

sportscotland Coaching, Officiating & Volunteering Awards 2019: Out of over 340 nominations across 15 categories that were received, Aimee Work was named the ‘Young Volunteer of the Year’.

The Cherries Awards: The HR & Organisational Development team were finalists in the ‘Exceptional Employee Engagement’ category while Nickie Scorgie, Head of the department, was nominated for the ‘Mike Reid Community Award’.

ukactive Awards: Get active @ Sheddocksley was nominated as a finalist for the ‘Regional Club of the Year’ award at the star-studded national event.

Celebrate Aberdeen Awards: Sport Aberdeen was up for ‘Large Organisation of the Year’ and was also nominated as the third sector partner in ‘Corporate Partnership of the Year’ alongside local charity We Too!.

Scottish Swimming Awards: Sport Aberdeen’s Aquatics team were finalists in the ‘Learn to Swim Provider of the Year’ category, a title which they triumphantly took home in 2017.

Above: An assortment of Sport Aberdeen accolades.