23.2.18
Next Article: Exciting announcement for sport in the City 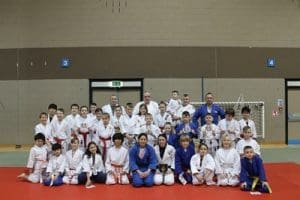 Sisters Louise and Kimberley Renicks, who are both Commonwealth gold medallists from 2014, led sessions with the junior and senior groups at the local club on Tuesday (20th February) at the Beach Leisure Centre.

Alongside their Commonwealth Games success, the siblings have competed at European and World level. Jean Davidson Aberdeen Judo Club Secretary said, “it was an honour for the Club to have them take the sessions”.

The Granite City Martial Arts club runs on a Tuesday and a Thursday for juniors and seniors. The junior session is for children up to the age of 13 years and the senior session accommodates ages 14 and upwards.

The night was a resounding success with over 50 participants turning up for the special session including those travelling from other judo clubs around the North East.

“We were thrilled to welcome Louise and Kimberley to the Beach leisure Centre and to see such a strong turnout was great.

“Sport Aberdeen is committed to creating opportunities and inspiring people to take part in sport and through local clubs we can encourage more people of all ages and abilities to get active.”

“Louise and Kimberly were fantastic and held everyone’s attention during both junior and senior sessions. It was an honour for the club to have them take the sessions.

“This is something we need to do more of and hopefully we will be able to have another session like this in the future. The turnout we had was amazing and I would like to thank the clubs present for their support.”

Next Article: Exciting announcement for sport in the City