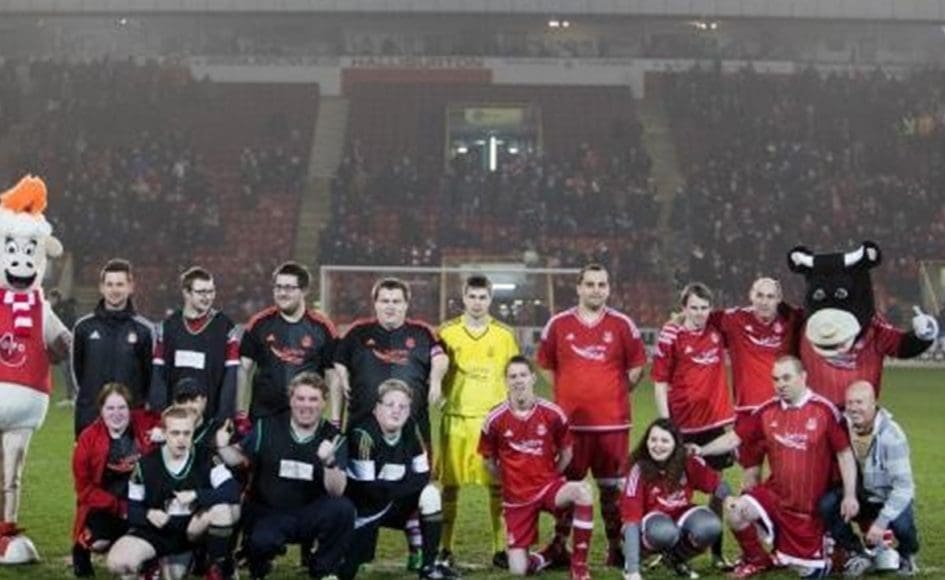 Registered charity Sport Aberdeen, in partnership with AFCCT, run the Everybody Active Football Team for people with additional support needs. Everybody Active, facilitated by Sport Aberdeen is an exciting and extensive programme aimed at opening up sport and physical activity to adults with a learning disability.

Fourteen players were joined by their coaches, supporters and family at the match where everyone enjoyed an exciting first half, which saw the Don’s go 4-0 up with a flurry of goals.  The team got the chance to take to the pitch themselves at half time where they played two small sided games, led by their coaches Andy Will and Scott Duncan from AFCCT.

For the players, many of whom are Aberdeen FC fans, the chance to play at Pittodrie in front of a 10,500 strong crowd was a once in a lifetime experience.  Everyone did themselves proud with some excellent play, Adam Rooney certainly wasn’t the only player to score a hat-trick in the stadium on the night!

The final score saw a 7-2 win for Aberdeen making it the highest scoring match of the 2016/ 17 domestic season. An action packed night for all.

Everybody Active Football sessions are open to male and female players aged 16 years and over with a physical, sensory or learning disability.  Sessions take place at Sheddocksley Sports Centre on Fridays from 1:30 – 3pm during school term time.  In addition to weekly training, the players have the opportunity to play in local and national festivals and tournaments.

For more information, please contact Andrinne Craig on ACraig@sportaberdeen.co.uk or 01224 047926