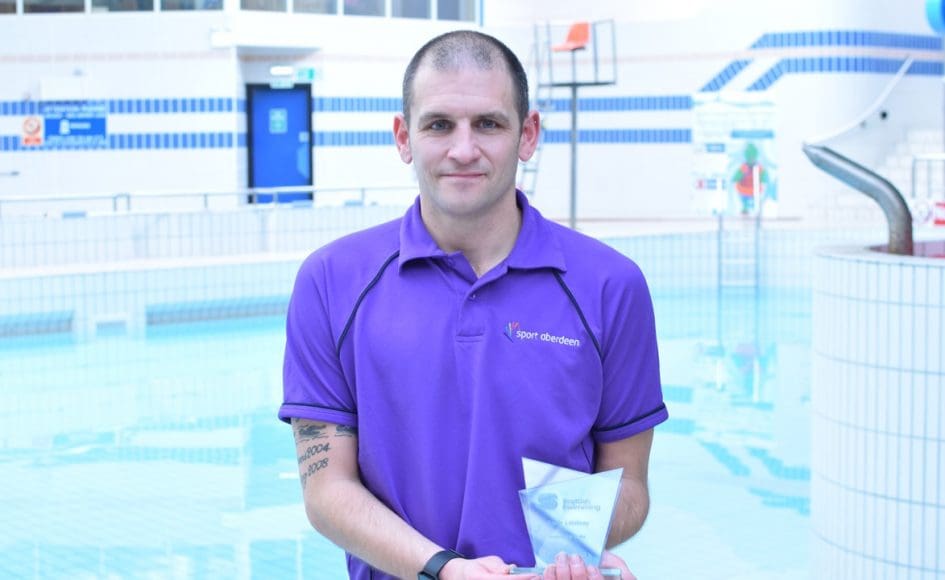 The awards which took place at the Radisson Blu Hotel in Glasgow, acted as a double celebration of the achievements made by Scottish competitors in Aquatics events and also welcomed new athletes into the Scottish Swimming Hall of Fame.

Andrew was unbeaten for over 10 years on the international stage in his favoured S7 100m backstroke event between 1997-2007. He competed at four Paralympic games between 1996 and 2008 winning three medals, two of which were gold. Three out of the four medals won at IPC World Championships between 1998 and 2006 were also gold while his record at European Championships between 1996 and 2008 is exceptional; winning ten medals including five gold. A stalwart of the British team during this time, Andrew mentored a number of up and coming athletes including Jonathan Fox.

The swimmer who now works for Sport Aberdeen, spoke of his shock upon finding out about his induction this September:

“I was sitting reading through my emails late one Tuesday night when I read the message saying I was to be inducted and I had absolutely no inkling that this was on the cards. I was shocked.

“Apparently I was a good fit for the Hall of Fame in that I am a retired, multi-medallist who has competed at several Paralympics and European Championships.”

“It’s fantastic that such inspirational and talented athletes work with us at Sport Aberdeen. Andrew’s achievements in his field speak for themselves and his inclusion in the Swimming Hall of Fame is recognition of this.

“Sport Aberdeen aims to create opportunities, inspire people and change lives and it’s safe to say that Andrew has and will continue to inspire Scottish Paralympic swimmers for many years to come.”

Andrew is keen to stay involved within the sport by imparting his years of knowledge onto up and coming swimmers as a coach, ideally within Sport Aberdeen.

Graeme Marchbank, Chair of Scottish Swimming, thanked all involved in the aquatic community for a successful year:

“The Scottish Swimming Awards once again acknowledge the outstanding successes achieved throughout the aquatics field from athletes and coaches to volunteers and local authorities, all of whom play an important role in leading our sport – a sport for all, a sport for life.

“Scottish Swimming has enjoyed great success over the past 12 months and once again we are delighted that there was so much to celebrate, and we look forward to 2019.”