A team of over 80 will assemble in May to take on this year’s BHGE 10k challenge in memory of an Aberdeen man who tragically passed away last year.

The impressive team is named Ali’s Athletes in memory of Ali Repper who passed away aged 27 in April 2017 following his battle with a brain tumour. 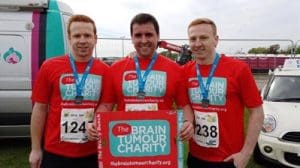 Above Steven, Ali and Graham after completing the Baker Hughes 2014

The team, headed up by brothers Graham and Steven Repper, have raised over £50,000 to date for The Brain Tumour Charity and will rally together to take on the North East’s longest running road race this year in memory of Ali, who himself completed the 10K twice, once after his diagnosis in which he also raised money for charity.

Graham Repper, who has had a huge hand in assembling such an inspiring number of runners, said:

“We thought the BHGE 10K was the perfect event for friends and family to gather and run in memory of Ali in his home city, just over a year after he passed. We are hoping to raise vital funds for The Brain Tumour Charity via our supporters group ‘The Repper Brothers Fund’ although raising awareness of brain tumours and the charity is almost equally important.”

The team, which consists of friends, family and others inspired by Ali’s determination, are dedicated to raising awareness and vital funds for UK based charity in recognition of the support it offered Ali and is family after he was given the diagnosis in 2013.

Ali’s Athletes have even inspired off-grid participants, with one budding runner completing the 10k challenge on a treadmill offshore.

“Ali himself completed the 10K twice, once after diagnosis in which he raised money for The Brain Tumour Charity also. He would be the first to tell you that he was by no means an athlete although showed tremendous determination and strength to complete the race twice – once with a leg fracture and the other after having a big seizure 2K in.

“We think the BHGE 10K has such huge significance for Aberdeen in bringing people together for what is always an extremely fun and family friendly event. It’s an incentive for people to get out there and keep active while in a lot of cases such as our own helping to raise vital funds and awareness for some extremely worthwhile causes.

“There are a significant number of Ali’s Athletes who have taken part previously although there are also many signed up to run who claim they have never run in their life! I have to say it’s the ones who haven’t done much running before out there training hard and showing the rest of us up!”

An exert written by Ali with the support of brothers Steven and Graham shortly before he passed away:

“In August of 2013 at the age of 24 I (Ali) received the news that I had a large and incurable brain tumour – at the time a grade 2 astrocytoma. The only sign had been two seizures I had the previous week. Since diagnosis life took a completely different route with not only the associated epilepsy and medication as a daily reminder but the treatment I have received in recent years. (Biopsy, Surgery x 2, Radiotherapy x 2 and Chemotherapy). I’ve been extremely lucky to have great support from family, friends old and new, medical staff and my work, who have all helped in many ways.

“Through this experience, my brothers (Steven and Graham) and I decided we wanted to give something back and raise money to support others in a similar position. In October 2013 we started our fundraising efforts and in 2014 set up as ‘The Repper Brothers Fund’ – an official supporters group to The Brain Tumour Charity. The Brain Tumour Charity is a fantastic organisation that is doing some great work – saving life’s through research, information, awareness and policy.”

“Hearing of not only Ali’s dedication, but the team of runners who are now rallying together to raise money and awareness for this brilliant charity is truly inspirational and I am certain that he would be extremely proud and overwhelmed by the support people are showing in his memory, ensuring his legacy lives on to the full.

“The BHGE 10k is an event at the heart of our city which brings people together from all walks of life and it is this support and community spirit which brings the race to life. Raising awareness and money for brilliant charities is at the forefront of the BHGE 10k Running Festival and I wish all of Ali’s Athletes the best of luck on the run up and on the day.”

Find out more about how you can use the BHGE 10k Running Festival to raise awareness and funds for your chosen charity here.