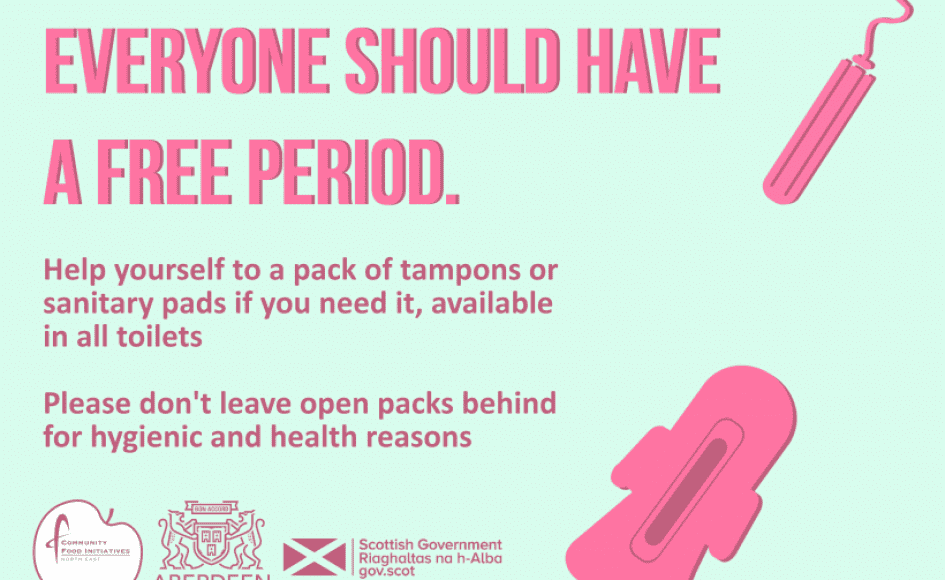 Award-winning charity Sport Aberdeen has said it is ‘proud’ to be providing complimentary sanitary items throughout the city again, with the aim to help tackle ‘period poverty’.

The free period products are being distributed by Community Food Initiatives North East (CFINE), a charity and social enterprise, for Aberdeen City Council to public venues across the city where significant footfall has been identified. Sport Aberdeen’s venues will be restocked within the coming weeks after the local charity took part in the initiative earlier this year.

The Scottish Government made funding available in 2018 to supply products with the hope of eliminating ‘period poverty’ and this week MSPs voted unanimously to end period poverty for women and girls throughout the nation, making Scotland the first country in the world to make free period products available in all schools, universities, colleges and public buildings.

‘Period poverty’ refers to having a lack of access to sanitary products due to financial constraints. A study released by charity Plan International UK has revealed that almost a third (30%) of girls aged 14-21 have had issues either affording or accessing sanitary wear in lockdown and over half (54%) of these girls have used toilet paper as an alternative to period products. But even that hasn’t always been an option during lockdown, as one in five girls (20%) said their periods have also been harder to manage due to the lack of toilet roll available. 1

“Sport Aberdeen is proud to further support this nationwide move in tackling period poverty by providing free sanitary products at a number of our citywide venues with the potential to expand this offering where there is substantial footfall.”

A further five city venues will be stocked within the coming weeks.

“Sport Aberdeen is proud to further support this nationwide move in tackling period poverty by providing free sanitary products at a number of our citywide venues with the potential to expand this offering where there is substantial footfall.

“Results show an increasingly large number of girls and women often do not participate in sport due to lack of sanitary products, and this problem has clearly been significantly heightened by the current pandemic.

“As a charity we look to support the community wherever possible and remove barriers so that we can encourage more people to take part in physical activity.”

“We are delighted to see Scotland taking the lead in ending period poverty by providing access to free sanitary products for everyone who needs them.

“We are proud to have been an advocate of tackling period poverty since 2017. CFINE successfully hosted the Access to Free Sanitary Products pilot in 2017 and have been making free period products accessible in partnership with the Scottish Government through FareShare, and Aberdeen City Council ever since.

“A massive thank you to all our Sport Aberdeen, partners, volunteers and staff who has worked on the Access to Free Period Products Project.”