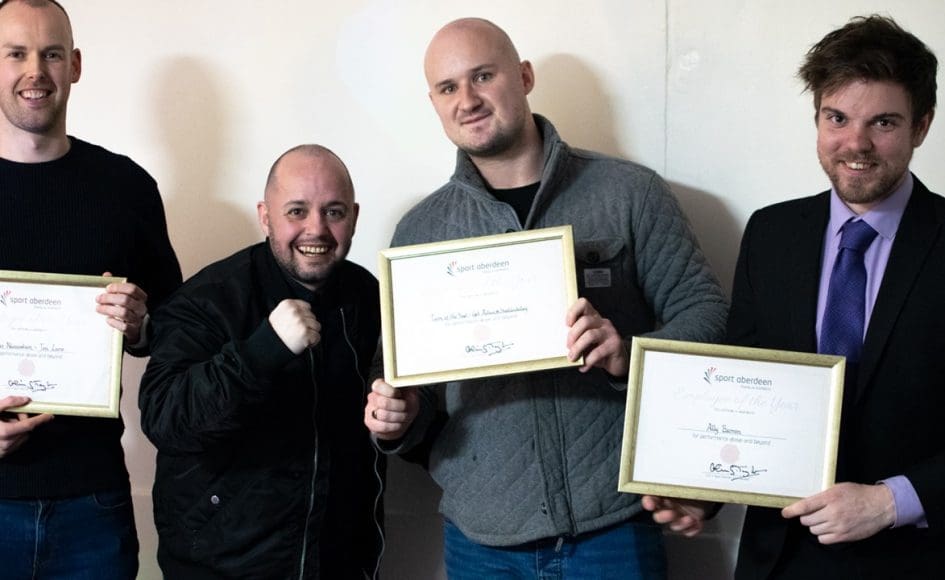 1.3.19
Next Article: The future of health and wellbeing can be found within the community

The 2018 Chairman’s Awards proved to be a great success again this year, with not one, not two…but three winners!

The first winner to be presented with the Peoples Award of the Year, was Jon Lurie.

Jon started working with Sport Aberdeen in February 2010 in the position of Leisure Attendant at Alex Collie Sports Centre, before being promoted to Health and Wellness Advisor in October 2013. The recipient of August 2018’s Employee of the Month, Jon was presented with this award for the passion and person centred approach he shows in his role.

Sport Aberdeen received a letter with glowing praise for Jon from a former participant recovering from prostate cancer who had been referred to light circuit training classes, of which Jon led. The participant could not speak more highly of Jon and wished to thank him for helping overcome a number of hurdles, one of which was getting back into physical activity which had been a large part of his life.

This particular story is one example of how Jon positively impacts the lives of his participants. Jon continually evaluates the needs of his participants to ensure that the activities remain relevant and they get the most out of their classes. The passion and dedication that Jon shows in his job is why he deserves to win the Peoples Nomination. Well done Jon!

The second winner of the Chairman’s Awards to be presented with Employee of the Year, was Ally Barron.

Ally was the recipient of Employee of the Month in March 2018 in recognition for his ongoing hard work and contribution to the successful and continued growth in membership sales. Ally has led teams and venues to achieve a substantial and sustained increase in membership sales leading to the increase in customers and investment opportunities.

Lastly, the team at Get active @ Sheddocksley were presented with the Chairman’s Award for Team of the Year.

The recipients of December 2018’s Employee of The Month in special recognition of their sheer guts and determination during the lead up to the reopening of Get active @ Sheddocksley. The team remained positive despite multiple delays to the project, staying focussed and always ensuring the customers were kept up to date with progress.

Congratulations to Jon, Ally, the Get active @ Sheddocksley team and all the 2018 Employee of the Month winners!

Next Article: The future of health and wellbeing can be found within the community