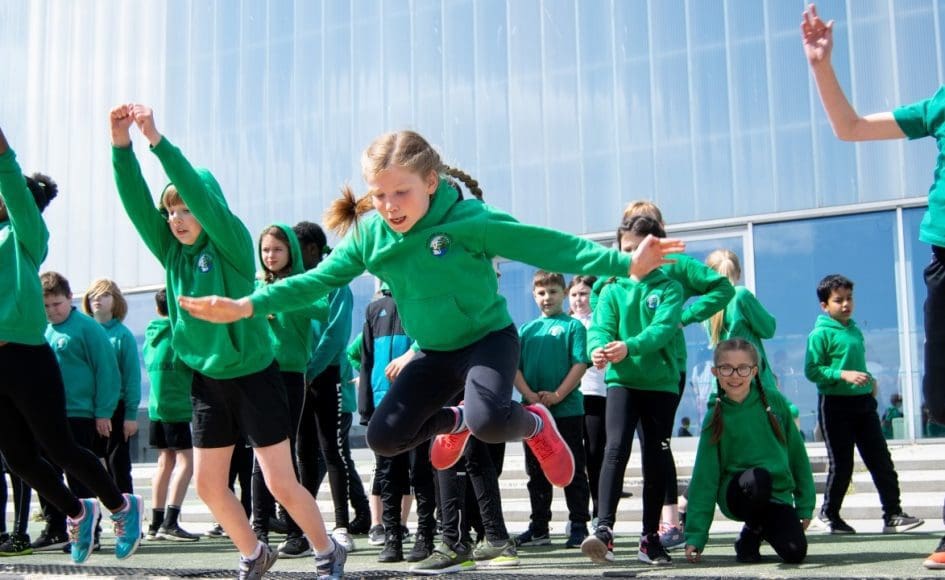 Primary school pupils from across Aberdeen had a ball this week as one of Scotland’s largest sports projects culminated in a celebration of health, wellbeing and the benefits of an active lifestyle.

Over 1,500 pupils from 45 city primary schools converged on Aberdeen Sports Village on Friday 24 May, as the annual Aberdeen Youth Games programme concluded with its Primary Festival of Sport.

As she prepares for the FIFA Women’s World Cup next month, Scotland captain and Aberdeen Youth Games ambassador Rachel Corsie believes that the programme can be a transformational one for the young people involved.

She said: “Sport for me has been a catalyst for so much of my success. It offers us the opportunity to work in teams, build friendships, de-stress from our studies and it has the potential to open the door to possibilities that we may have never thought possible.

“I feel privileged to be an ambassador for the Aberdeen Youth Games and I cannot wait to watch the next generation of sporting athletes thrive and push boundaries far outreaching the opportunities I have had so far.”

Launched by Robert Gordon University’s (RGU) Sport and Exercise Science team and Sport Aberdeen in 2013 – with support from North East Scotland College (NESCol) and The Wood Foundation – the Aberdeen Youth Games is an innovative and multi award-winning programme which promotes physical activity, health and wellbeing amongst young people.

A Legacy 2014 programme, it sees second year students from a range of RGU and NESCol courses deliver over 2,900 hours of skills-based coaching to pupils as part of their work placements with Sport Aberdeen’s Active Schools team.

This addition means that a total of over 6,000 young people from every city school feel the benefits of the coaching, whilst the students themselves put their own skills to the test in a unique and unrivalled development opportunity.

Dr Bryan McCann, lecturer in Sport and Exercise Science at RGU, leads the development of the Aberdeen Youth Games in partnership with colleagues from Sport Aberdeen and has recently been honoured for his efforts in Universities UK’s MadeAtUni Nation’s Lifesavers campaign.

He said: “The Aberdeen Youth Games is made possible by our exciting and innovative partnership approach to allow our students to act as community assets. The programme provides them with invaluable and impactful real-life learning opportunities, which enhances their employability whilst making a huge difference to the lives of young people in Aberdeen.

“It has been incredible to see the programme grow over the years, touching the lives of thousands of the city’s young people and providing a fantastic experience for everyone involved.”

The Wood Foundation committed £50,000 over five years to support the delivery of the Aberdeen Youth Games. In this, the fourth year of the partnership, it provided an additional £10,000 to support the increased secondary school activities and enhance the overall quality of the programme through the purchasing of high-end sporting equipment.

Sir Ian Wood, Chairman of The Wood Foundation, said: “The Aberdeen Youth Games have engaged thousands of pupils from throughout the city with motivating and exciting physical education opportunities.

“The Festival of Sport is a sight to behold – a field full of happy, energetic and enthusiastic children in a celebration of healthy living and exercise. We are delighted to be supporting Aberdeen Youth Games as part of our commitment to developing Scotland’s young people.”

Everyone who participated in this year’s Festival received a special commemorative medal which was designed by Skene Square School pupil Nada Fawaz, as part of a competition with Gray’s School of Art.

This year’s Primary Festival of Sport had an added Nordic touch, as Sport Aberdeen’s Active Schools team hosted a delegation of 17 education staff from the Municipality of Kópavogur in Iceland. The pupils and students paid homage to the guests with a spectacular ‘Iceland Viking thunder clap’ as part of the opening ceremony.

Keith Gerrard, Director of Healthy and Active Communities at Sport Aberdeen, said: “The Aberdeen Youth Games has become a hugely anticipated and enjoyable event in Aberdeen’s sporting calendar and underlines the importance of keeping young people active in a fun environment.

“Our partnerships with RGU and NESCol encourage a healthy and active lifestyle and help to get more children, more active, more often. Having so many primary schools take part again this year clearly illustrates the powerful and positive impact that sport can have on the health and wellbeing of our local communities.

“I would also like to thank The Wood Foundation for their funding support, as the programme would not be possible without it.”

Chris Clearly, who helped Scotland reach the bronze medal match in his Commonwealth Games debut last year, has been bowled over by his first experience as an Aberdeen Youth Games ambassador.

He said: “It has been incredible to see so many young people having the time of their lives and truly seeing the benefits that sport can bring to your life. The enthusiasm has been infectious and I have to credit everyone at RGU, NESCol and Sport Aberdeen for making it all possible.”