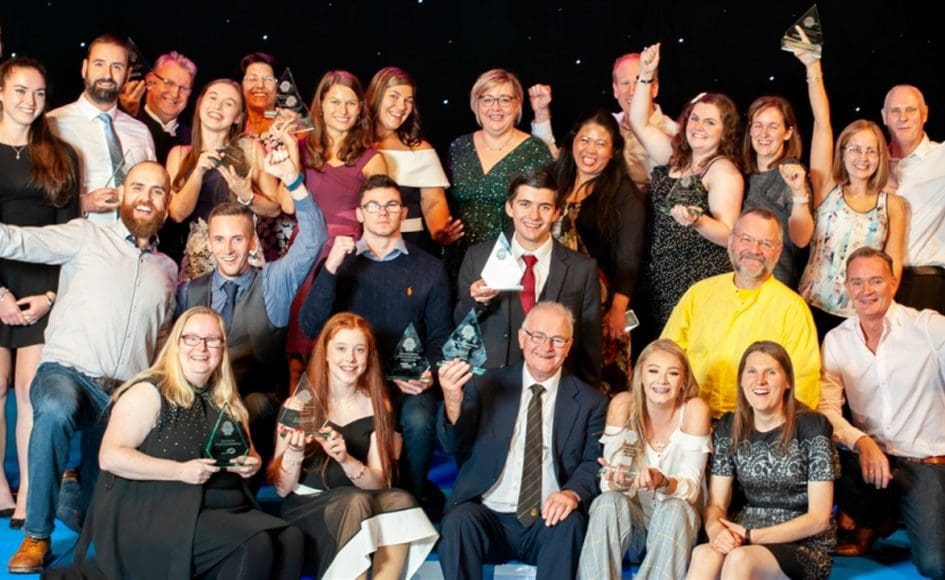 5.10.18
Next Article: Sports Centre receives finishing touches ahead of relaunch

Local sporting talents have been recognised at Aberdeen’s Sports Awards 2018.

Now in their 25th year, the awards organised by the Active Aberdeen Partnership, recognised the wealth of sporting achievements and contributions made by local athletes, volunteers, clubs and community projects who encourage individuals to be active in Aberdeen.

More than 390 people attended the event at the Aberdeen Exhibition and Conference Centre on Thursday 4 October, which saw 17 awards presented and over £2,500 raised for beneficiary ClubSport Aberdeen, a new and vibrant body that provides a unified voice for sports clubs in Aberdeen.

Gymnastics Coach, Sue Morgan won the prestigious Lifetime Achievement Award for her 25 years of dedication and contribution to the Beacon Rhythmic Gymnastics Club.

“The Active Aberdeen Partnership has overseen a real step change in Aberdeen’s Sports Awards and last night was, once again, a very memorable occasion, recognising and rewarding the rich vein of sporting talent that is nurtured here in the City.

“I would like to take this opportunity to thank all of our sponsors, without whom the event just wouldn’t be possible and most importantly, to all of the finalists and to those who nominated them. We wish them all continued success in their sporting careers and hope that our support perhaps played some small part in that journey.

“It was also a pleasure to present a special award to our host, Dave Macdermid, to recognise his outstanding commitment to Aberdeen’s Sports Awards over the past 25 years.”

The winners in the 17 categories were as follows:

Community Sports Project of the Year
Food and Fun

Secondary School of the Year
Bridge of Don Academy

Next Article: Sports Centre receives finishing touches ahead of relaunch