16.2.18
Next Article: Local council leaders back pledge to Activate the City 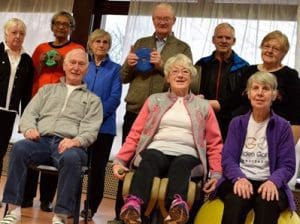 The Winter Golden Games were hosted at Westburn Outdoor Centre last Thursday (8th February), marking the launch of this year’s summer event and thanking those who work to bring the citywide games to life.

The Winter Golden Games, which launched last year, are delivered by the Active Aberdeen Partnership (AAP) and aim to get people aged 65 and over actively involved in physical activity regardless of age or ability.

The event also served as a thank you to the Golden Game Ambassadors for their continued support in developing, promoting and running the games, which has become a hugely successful and permanent fixture in Aberdeen’s sporting calendar.

The 2018 Golden Games will take place on Thursday 7th to Friday 15th June.

“Physical activity has a hugely positive and lasting effect on overall health and wellbeing and taking part in sport is something that people of all ages and abilities can enjoy.

“The Winter Golden Games give us the perfect stage to recognise ambassadors and organisations who support the award-winning initiative, and I would like to thank each and every one of them on behalf of the Active Aberdeen Partnership.”

Next Article: Local council leaders back pledge to Activate the City